To the Editor: A 35-year-old man who smoked for 15 years suffered from chest pain 12 days ago before admission. He was diagnosed as myocardial infarction. Thrombolytic therapy was given consequently. The electrocardiogram showed sub-acute inferior wall myocardial infarction. Echocardiogram showed attenuated constriction of the inferior wall with an ejection fraction of 59%. On September 5, 2013, he was treated with a XINSORB scaffold in right coronary artery (RCA).

Angiography revealed a regional lesion with severe stenosis in the distal RCA. No lesions were detected in the rest segment of coronary arteries [Figure 1a]. Intravascular ultrasound (IVUS) confirmed abundant fibrous plaques with plaque rupture in the lesion site [Figure 1b]. After predilatation, a XINSORB scaffold whose size was 3.0 mm × 18.0 mm was implanted. Repeated angiography showed the scaffold was well deployed. Minimal luminal diameter (MLD) was 2.95 mm while in-scaffold residual stenosis was 7.4% [Figure 1c]. No malapposition was detected under IVUS [Figure 1d]. The scaffold area was 6.62 ± 0.57 mm2. The patient was discharged 2 days after the procedure. Neither major adverse cardiac events nor stent thrombus related events were recorded. During the next 6 months, the patient recovered well without recurrent ischemic symptoms. Dual antiplatelet therapy was maintained. Angiography at 6-month follow-up showed the scaffold remained patent without significant neointimal hyperplasia. In-scaffold MLD and percent of diameter stenosis was 2.73 mm and 8.8% respectively, therefore the in-scaffold late luminal loss was calculated as 0.22 mm [Figure 1e]. The area of scaffold, lumen and neointima was 6.69 ± 0.52 mm2, 6.44 ± 0.46 mm2 and 0.24 ± 0.11 mm2 under IVUS [Figure 1f]. No difference was detected between the scaffold area after the procedure and 6-month follow-up (P = 0.82). Optical coherence tomography showed that all struts remained the appearance of preserved box. The struts were embedded in neointima and well-apposed. 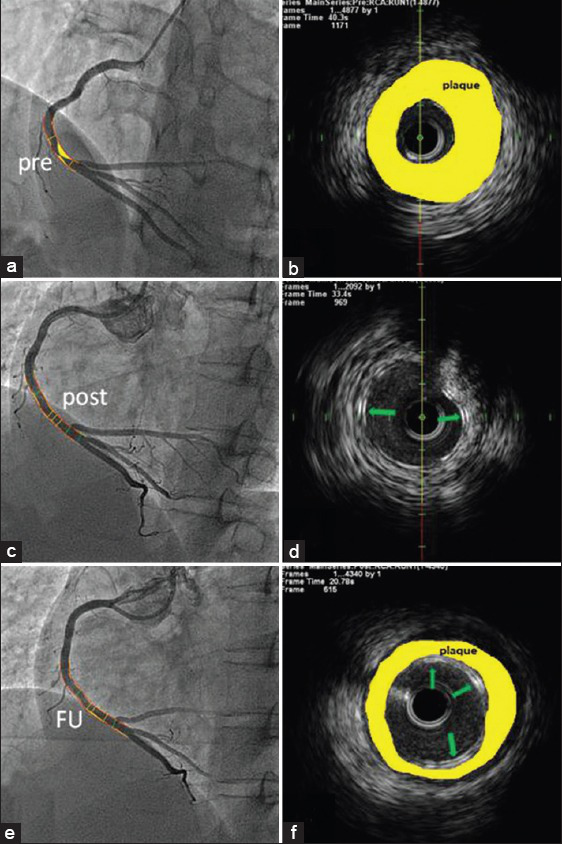 Bioresorbable XINSORB scaffold is a balloon-expandable stent system. The scaffold is composed of poly-L-lactic acid (PLLA) as its backbone. Poly-D-L-lactic acid mixed with PLLA is coated on the scaffold surface, containing sirolimus and controlling its elution. The dose of sirolimus is 8 μg/mm. About 80% of anti-proliferative drugs are eluted in 28 days ex vivo. Thickness of strut is 160 μm. The device is stored at 4°C.[1,2]

The safety and effectiveness of bioresorbable scaffold (BRS) are confirmed by ABSORB studies.[3,4,5] The XINSORB scaffold is the first domestically made BRS by Chinese company. Promising clinical and angiographic outcomes have been established in this patient. Some advice should be followed when using this device. First, mandatory predilatation must be performed. A balloon to artery ratio of 1:1 is recommended. Second, the scaffold should not be deployed until 90 s after it exposes to the blood. Third, the scaffold should be slowly expanded from 0 to 4 atm during the first 10 s. After that, the scaffold can be fully expanded at a pressure not exceeding 14 atm for 30 s. Lastly, postdilatation was allowed with a 3.0 mm or 3.25 mm noncompliance balloon that was shorter than the implanted scaffold.

This is the first implantation of a domestic BRS. Currently, a single-arm clinical trial of XINSORB scaffold is being carried out in Zhongshan Hospital, Fudan University and Chinese People's Liberation Army General Hospital. Large scale and long-term follow-up are required to confirm the substantial benefits of XINSORB scaffold in treating coronary lesions of Chinese population.